Banks & Wag and Jamie Salisbury co-scored all 3 series - which is with wall-to-wall music and no dialogue.

The show has enjoyed mighty success. It was as at December 2019 the second most-watched original kids series globally on Netflix after Boss Baby: Back in Business. It's also easily the most watched series on YouTube's Netflix Jnr channel. The series has a particularly large following in the US, India, Brazil and Mexico, among other countries.

Mighty Little Bheem is created by Green Gold Animation’s CEO Rajiv Chilaka. It first debuted on Netflix in 190 countries in 2019. 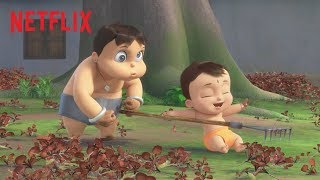