Tapping into the huge online passion for extreme make-up transformations, hit series Glow Up: Britain’s Next Make-Up Star sees a talented cast of hopefuls live and work together as they attempt to prove their potential to industry professionals from a multitude of worlds from fashion to film.

Composer Tom Haines scored title and much of the in-show music. His other work includes channel ident music for CBBC, BBC 3 and music for E4 series Baewatch.

Glow Up: Britain’s Next Make-Up Star is a Wall to Wall production for BBC Three. The Executive Producer is Melissa Brown.

The Composerworks’ other recent Wall to Wall commissions include My Family, The Holocaust and Me (BBC One, Nainita Desai) and Child Genius (Channel 4, Paul Honey).

"Tom Haines was delightful to work with, from the initial meeting Tom took on board our thoughts and ideas but also added much more which helped deliver a really rich and interesting collection of tracks - my favourite one, a track made entirely with the sounds created from his wife’s make up kit!" 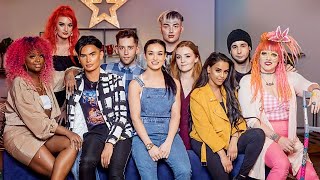